When Zen teacher Karen Maezen Miller and her family land in a house with a hundred-year-old Japanese garden, she uses the paradise in her backyard to glean the living wisdom of our natural world. Through her eyes, rocks convey faith, ponds preach stillness, flowers give love, and leaves express the effortless ease of letting go. Paradise in Plain Sight: Lessons from a Zen Garden welcomes readers into the garden for Zen lessons in fearlessness, forgiveness, presence, acceptance, and contentment. Miller gathers inspiration from the ground beneath her feet to remind us that paradise is always here and now. (New World Library)

Jennifer Fulwiler told herself she was happy. Why wouldn’t she be? She made good money as a programmer at a hot tech start-up, had just married a guy with a stack of Ivy League degrees, and lived in a twenty-first-floor condo where she could sip sauvignon blanc while watching the sun set behind the hills of Austin. Raised in a happy, atheist home, Jennifer had the freedom to think for herself and play by her own rules. Yet a creeping darkness followed her all of her life. Finally, one winter night, it drove her to the edge of her balcony, making her ask once and for all why anything mattered. At that moment everything she knew and believed was shattered. Asking the unflinching questions about life and death, good and evil, led Jennifer to Christianity, the religion she had reviled since she was an awkward, sceptical child growing up in the Bible Belt. Mortified by this turn of events, she hid her quest from everyone except her husband, concealing religious books in opaque bags as if they were porn and locking herself in public bathroom stalls to read the Bible. Just when Jennifer had a profound epiphany that gave her the courage to convert, she was diagnosed with a life-threatening medical condition-and the only treatment was directly at odds with the doctrines of her new-found faith. Something Other Than God: How I Passionately Sought Happiness and Accidentally Found It is a poignant, profound and often funny tale of one woman who set out to find the meaning of life and discovered that true happiness sometimes requires losing it all. (Ignatius Press)

For many financial professionals as well as individual investors, behavioral bias is the largest single factor behind poor investment decisions. The same instincts that our brains employ to keep us alive all too often work against us in the world of finance and investments. Investing Psychology: The Effects of Behavioral Finance on Investment Choice and Bias, by noted finance expert Tim Richards, explores several different types of behavioral bias, which pulls back the curtain on any illusions you have about yourself and your investing abilities. This practical investment guide explains that conventional financial wisdom is often nothing more than myth, and provides a detailed roadmap for overcoming behavioral bias. Investing Psychology is a unique book that shows readers how to dig deeper and persistently question everything in the financial world around them, to avoid the incorrect investment decisions that human nature all too often compels us to make. (John Wiley & Sons) 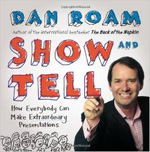 For the vast majority of us, giving a presentation is an extremely difficult and nerve-wracking process, whether we’re in a one-on-one meeting, a conference room with a dozen strangers, or a lecture hall in front of thousands. But according to Dan Roam, the visual communications expert and acclaimed author of The Back of the Napkin, it doesn’t have to be so hard. Dan draws on ideas he’s been honing for more than two decades as an award-winning presenter who has brought his whiteboard everywhere from Fortune 500 companies to tiny start-ups to the White House. In this short but powerful book, Show and Tell: How Everybody Can Make Extraordinary Presentations, Roam introduces a new set of tools for making extraordinary presentations in any setting. (Portfolio/Penguin Random House)